Shortly after I started my new job here at Mustard Research I was given the great news – my new colleagues had signed up to do the National 3 Peaks Challenge. I have to admit, at first I wasn’t very sure what it involved, although the name was kind of self-explanatory (it’s about climbing 3 mountains Irina, it’s not that hard!). However, I didn’t really know the nitty gritty of it – they seem to leave the “24 hours” bit out of the title for a good reason! My first reaction to this was “…ehm….how?” I honestly thought it was a joke they were playing on me.

But then I slept on it and realized – what better opportunity to explore the English countryside and bond with my new colleagues could I ask for (while secretly hoping this was not going to be a type of “make or break” situation).

The first training session was scheduled for Sunday, 8th of May – Kinder Scout in the Peak District, 9 miles, 1641 feet ascent. Great, I put my hand up and decided not to miss it. So I dusted off my walking boots (about 1 years’ worth of dust(!)…yes, it’s been that long), packed up my bag, put in clothes for all types of weather despite the 30 degrees outside, prepared some lunch and waited for my three training partners – Bethan, Anthony and Dexter to come pick me up.

We got to pretty Hayfield at around 10:30 and started our climb soon after. After a very steep ascent we got to the Kinder Reservoir, which looked very tempting on that extreme heat (why, oh why, did I have to carry all those clothes with me?!). We then continued our ascent through some sort of crevasse, said hello to plenty of sheep and lambs along the way, and got closer and closer to the plateau. But before getting all the way up there, we got to some so called stairs on which people look like tiny ants. Gosh, nature does have a way of putting things into perspective! 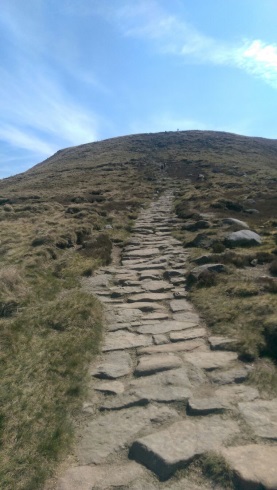 Shortly, after the steepest of ascents, we finally got up there. The excitement!

We then got to Kinder Downfall. There it was, my culture shock with English nature. Our instructions said “At Kinder Downfall, the tiny River Kinder falls dramatically over the edge of a Millstone Grit shelf at the head of a steep-sided clough”, so, in my defense, there was a lot of build-up. However, when we got there, the drama was nowhere to be found, as the waterfall was somehow condensed into tiny tiny drops falling over the mountain. Ok, English nature, you got me there!

Moving on, nothing to see here! (I’m being a mean foreigner now, the sight was pretty, and we did have a nice picnic next to it).

We then continued our walk on the Kinder plateau and got to the OS pillar. Surely, another spot for a group picture! 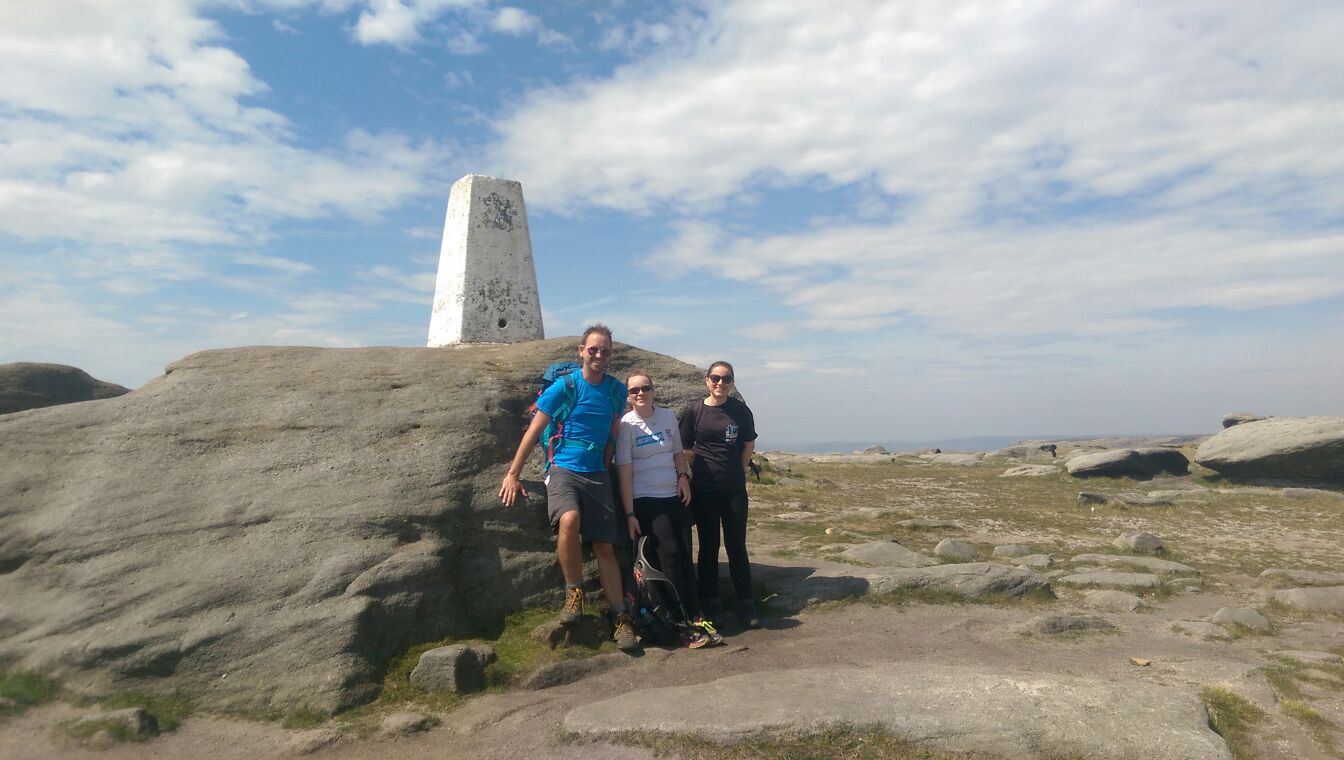 After a bit more walking on the plateau, we finally started our descent. We missed the Edale Cross marked on our instructions, although we were expecting it to be quite obvious. After a rather long stony path that was torture for both mind and ankles, we finally got to the tarmac bit that hinted we were getting closer and closer to the end. We were all barely dragging our swollen feet at this point, but the sense of accomplishment was getting bigger and bigger. We got back to the car after exactly 4 hours and 30 minutes of walking in extreme heat (did I mention the 30 degrees?).

We had done it, our first training day was over, and we did pretty well. I’m also very happy I was with Bethan and Anthony, they were great with instructions and navigation (note to self: check the dictionary for “scarp” and “cairned”). Although, to be honest, I think Dexter was our guide all along.

Great team work, I can’t wait for the next one – 22nd of May, Snowdon.

PS: if you want to support our team in the National 3 Peaks Challenge, please visit our fundraising page, all the money we raise will go to The Children’s Adventure Farm Trust

Written by Irina Dimitriade,
Posted on 20 May, 2016
View more articles