Unless you have been hiding under a rock for the past two years you will have heard about Gogglebox.  Hitting our screens in March 2013, it has been described as an observational documentary. When the first series aired I remember having discussions with friends and colleagues about the concept of this new programme and being met with a few confused looks.

On paper and in practice the notion of watching people sat in their homes watching TV doesn’t really sound very interesting does it? It also doesn’t sounds like it would be much of a success right? Wrong! The viewing figures would tend to disagree; it is going from strength to strength, with four million of us tuning in to the first episode of series 5 towards the end of February (this was not only the most watched programme that night but their highest overnight viewing figures to boot) and it has even won a BAFTA.

The team here at Mustard are no different from the rest of the nation that seem to be talking about Gogglebox – we love having a good catch up on a Monday morning to say what our favourite parts were and what made us laugh the most.

So why has it become such a phenomenon?  And why did I feel the need to ramble on about it a little?

Well as a researcher, an integral part of my job is to make observations. Whether the observations be in face-to-face depth interviews, focus groups, via Skype or simply by observing a person in a more natural setting I will always be on the look-out (pun intended) for body language, facial expressions, how people are interacting and behaving and assessing variation in vocal tone.

One observation I will make is that in series 1 of Gogglebox, everything was new and fresh and the people being filmed for the documentary (or the viewing public) didn’t really know what to expect.  We therefore should have got to view Steph and Dom, Sandy and Sandra and Leon and June (amongst others) in a pretty natural and realistic setting (obviously forgetting about the cameras being there!).

However, from series 2 onwards the cynic and researcher in me, has now made me view it differently. Are those being filmed now becoming characters? Are they playing up for the cameras? Is it now forced behaviour rather than natural? Are they saying things they think will get a positive reaction from the viewers?

As much as it pains me to say it the answer to all of the above is ‘Yes’. Will that stop me watching? No way! Like any good soap, the characters make the show and it is the real (ish) people of Gogglebox that make it such a success.

When we conduct observational research here at Mustard, we do it differently – we put the effort in during respondent recruitment to ensure there is no selection bias (ensuring respondents are reflective of the target population), we observe people in as natural a setting as possible and as moderators we make no pre-judgements of what or who we are observing; we leave our own opinions and judgements at the door.  We do this by utilizing a range of the most effective methods, both traditional and newer channels such as online communities, filmed diary entries or shopper insights.

Finally, we also wouldn’t observe the same respondents over and over again (well not unless it was a longitudinal study and it was necessary). In essence we work hard to make sure the observations are as close to the truth as is feasible.

Roll on the next instalment at 9pm Friday.

Feel free to join in the Monday morning Gogglebox gossip with Anthony on Twitter. 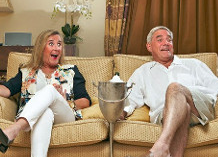